Arriving in Columbia, Missouri, at 18, Mateusz Haruza saw the University of Missouri as a stepping stone to a career in tech.

When the dean’s list student came out to his parents, they withdrew their financial support, and Haruza began struggling academically. He dropped out of college and started working at a UPS Store while running up credit card debt and stringing out his college loans. He’d hit “absolute rock bottom.”

That kind of recruiting was a relatively new solution for IBM and other companies that generally require bachelor’s degrees for entry-level white-collar workers. Now, strapped for talent, an increasing number of employers are reconsidering degree requirements and adopting training systems more common in blue-collar trades. 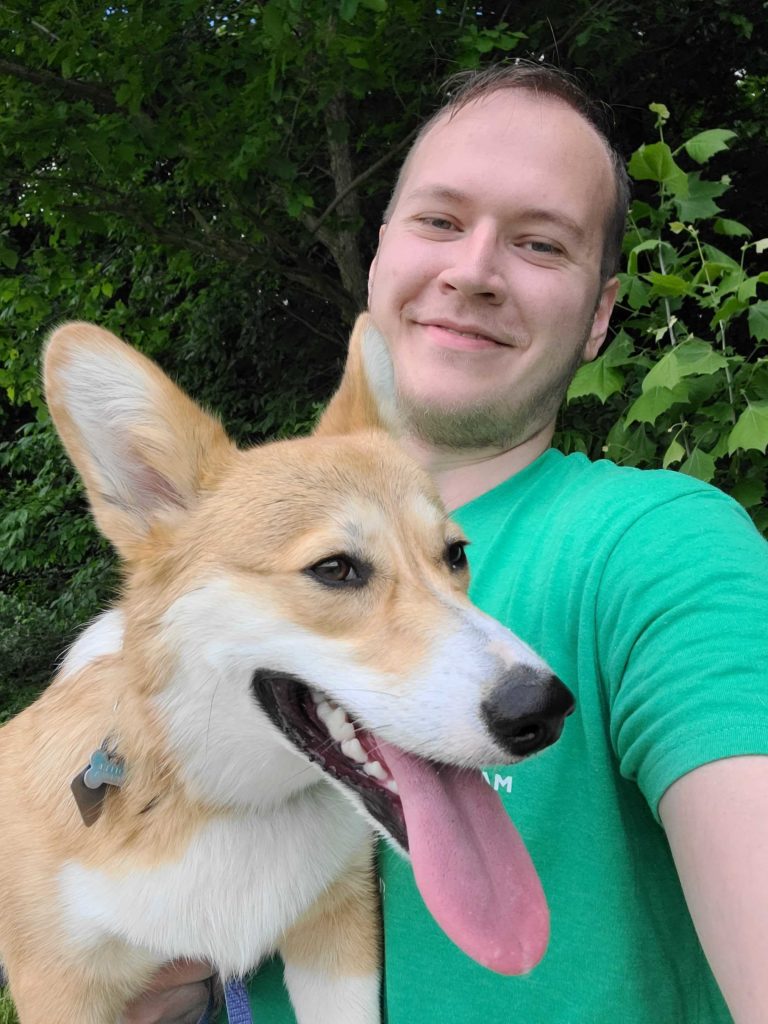 Mateusz Haruza, 27, is participating in an IBM program that pays trainees without college degrees to train for in-demand positions the company has otherwise had trouble filling. Mateusz Haruza

Haruza, now 27, is six months into IBM’s two-year program, and said it’s a supportive environment that feels like family.

That’s a feeling IBM is trying to grow. While claims of low-wage worker shortages have received considerable pushback, there’s broad consensus that some sectors of the economy — technology, health care and tech-adjacent businesses such as insurance — face a genuine dearth of qualified talent. Programs like IBM’s have been promoted as having so much potential to address this issue that Congress’s research arm recommended requiring employers to offer them, or to be taxed to pay for them.

While being paid to train is hardly a new idea, it can be effective on multiple levels.

Workers find more rewarding careers while employers enjoy a deeper talent pool, said Amy Kardel of CompTIA, an information technology trade association. People hired through the programs also tend to stay on the job longer; such programs can also broaden a company’s culture by attracting employees, including workers of color, whose life experiences are outside the high school-to-college career arc common in white-collar workplaces.

“Earn-and-learn strategies can open a door for someone into a career quickly,” said Kardel, CompTIA’s vice president for strategic workforce relationships.

Just one in 300 American workers have participated in a formalized on-the-job training program, a rate less than one-tenth of that in much of western Europe. This despite increased attention here to the white-collar version of the kind of apprenticeship models that remain a staple of the unionized building trades.

One in 300 American workers participates in programs in which employers pay them while they learn.

Still, being paid to train is becoming more common in the United States. The U.S. Department of Labor statistics shows a 70 percent increase in paid apprenticeships during the past decade.

Aon, a London-based insurance giant, opened its U.S. earn-and-learn program in 2017, launching a 26-student class to its North American headquarters in Chicago. It has since joined with other Chicago businesses and community colleges to bring on more than 1,000 employee trainees around the city, and expanded its program to Aon offices around the country. 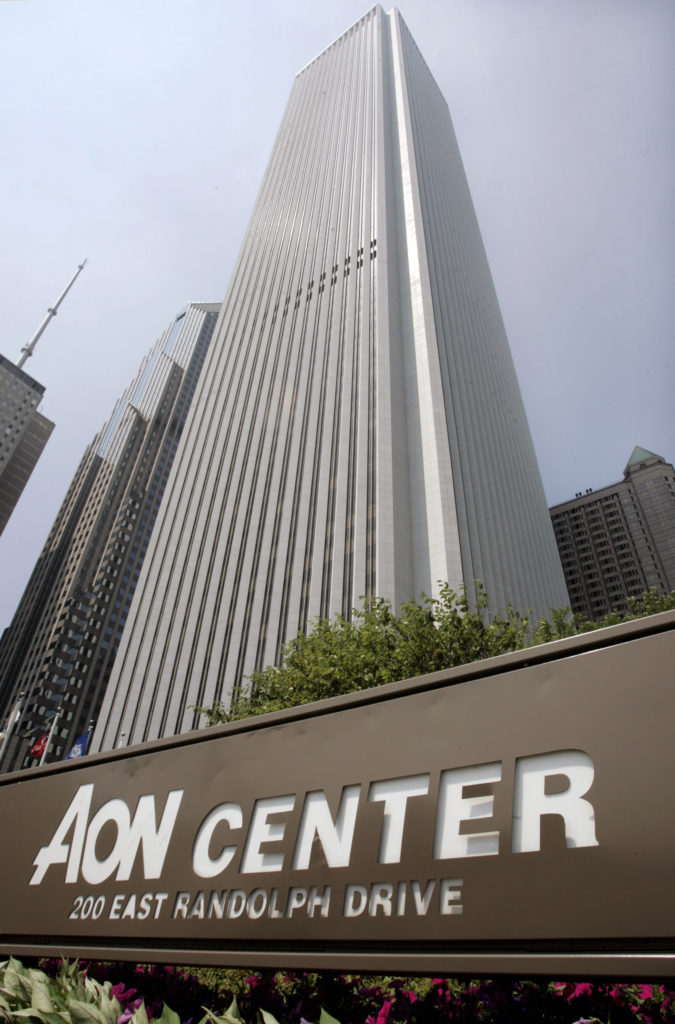 Aon Center in Chicago. The insurance giant has teamed up with other Chicago businesses and community colleges to bring on more than 1,000 employee-trainees. AP Photo/Charles Rex Arbogast

This shift to structured training also enables Aon to inject new diversity — in race, in gender and in life experience — into its business.

Bridget Gainer, Aon’s chief commercial officer, said the company is stronger for it.

“Look, we’re in the risk business,” Gainer said. “Being able to determine risk takes all types of thought.”

When looking for talent, Aon recruiters had been turning to the Big Ten universities, Gainer said. Overlooked were institutions like the one Gainer sees from her office window: Harold Washington College, one of the City Colleges of Chicago. 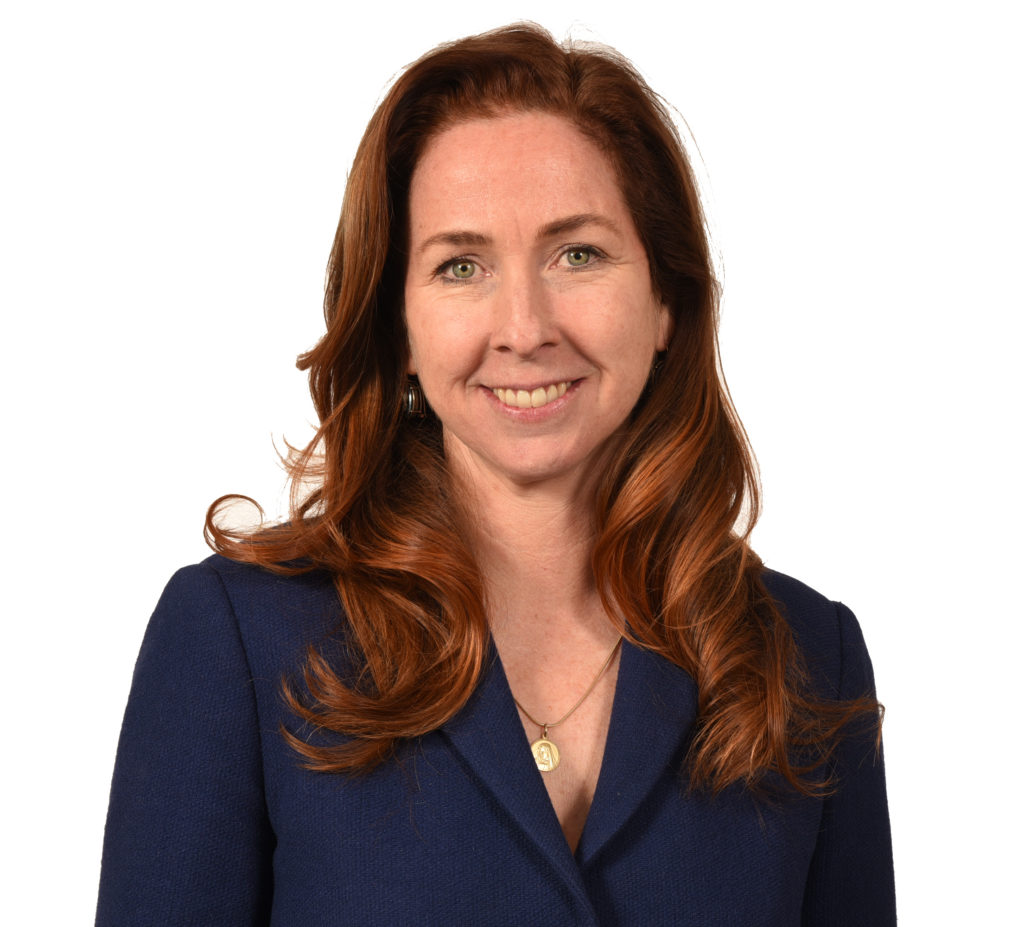 That’s where Juawana Allen found Aon, by way of a flyer in the library advertising the Aon program. Allen had been working as a nanny and in retail while going to school full time. Her aim then was a law degree. A meeting with an Aon recruiter changed her course.

“They were looking for people who were eager to learn and hungry for opportunity,” said Allen, 23. “I’m extremely ambitious, and this lined up exactly with what I wanted to do.” 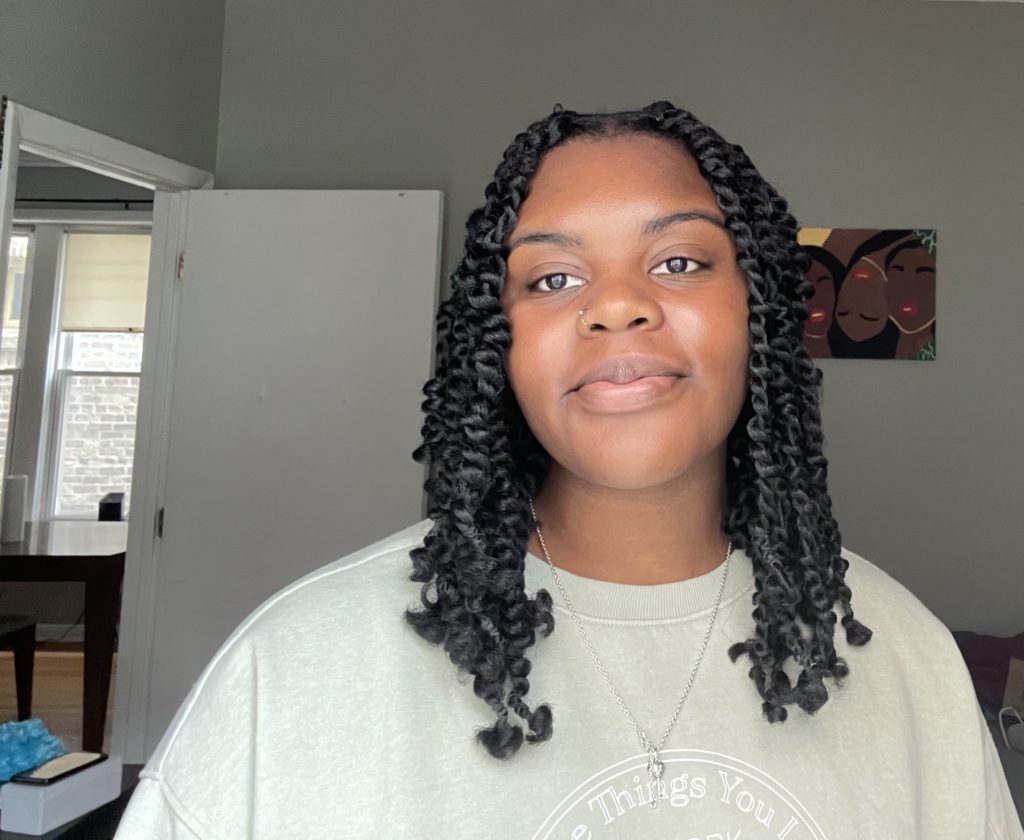 Juawana Allen, 23, has completed an on-the-job training program at Aon, an insurance firm that paid her to prepare for a job previously reserved for college graduates. Juawana Allen

Joining the company’s third trainee class, Allen was paid to split her hours between on-the-job training and classroom instruction provided at Harold Washington. The days were long — Allen and others regularly started work at 9 a.m. before heading to classes that wrapped up around 9 p.m. — but Allen made it through, graduating in December 2020. She now works in reinsurance in the company’s Dallas office.

Allen aspires to be one of the first women of color in a leadership role at Aon. If she succeeds, she will deliver on one of Gainer’s hopes: to improve diversity in senior positions. The insurance industry, like most industries, is disproportionately white and male at the management level. 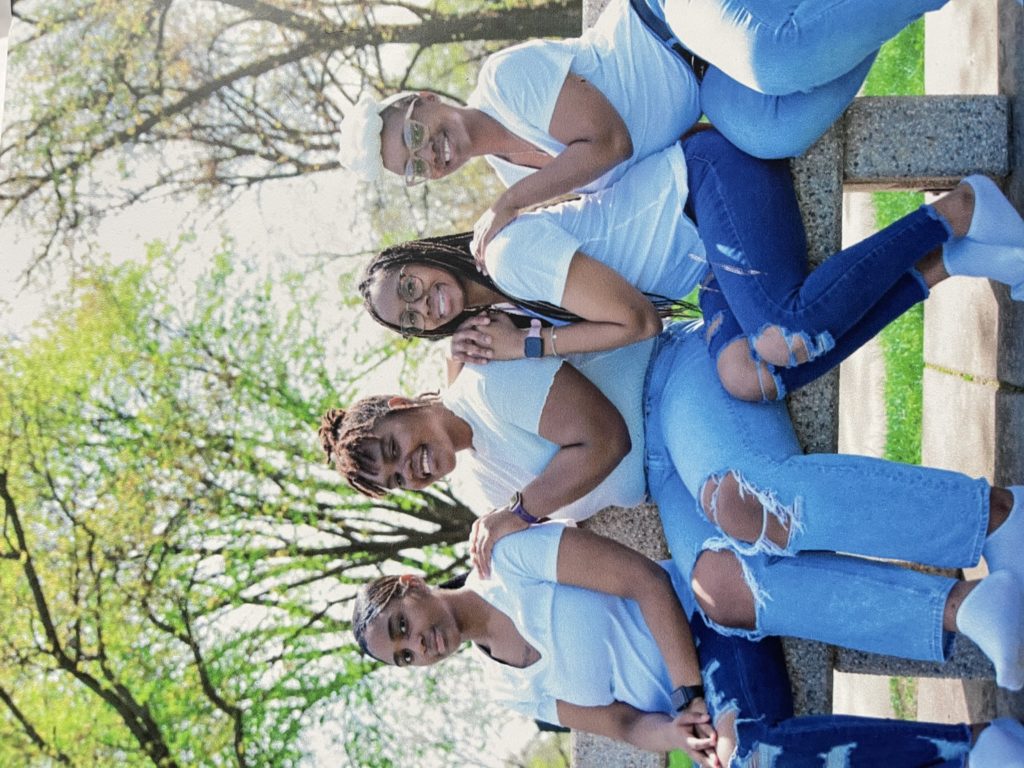 Juawana Allen, second from the left, with her three sisters. Allen, 23, has completed an on-the-job training program at Aon, an insurance firm that paid her to prepare for a job previously reserved for college graduates. Juawana Allen

“As a business community, we need to do a better job of diversifying our workforce, full stop,” Gainer said. “If you don’t address it at the entry level, you’re abdicating your responsibility to actually make a change.”

“As a business community, we need to do a better job of diversifying our workforce, full stop.

Another set of employers — America’s hospitals and clinics — have long relied on women and people of color to fill their ranks. They are chronically short on staff nonetheless.

To address that shortfall in Washington, a training organization run by the state’s largest hospitals and their biggest labor union provides a tuition assistance program that will pay the way for hospital employees to advance their educations in health-related fields. 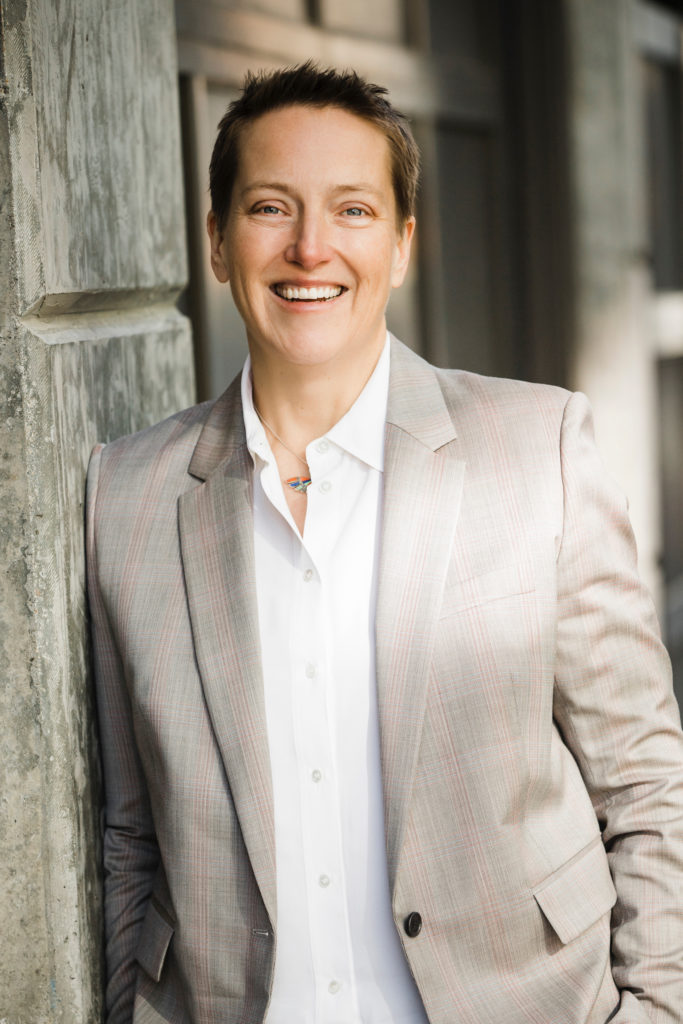 Laura Hopkins, executive director of a program in Washington State that pays for working hospital employees to get anything from associate degrees to PhDs. “You don’t have to have a dime in your pocket and you can get your education.” Laura Hopkins

“We’ll pay for their AA, their BA, their MBA, their PhD, the whole nine yards,” said Laura Hopkins, executive director at SEIU Healthcare 1199NW Multi-Employer Training and Education Fund. “You don’t have to have a dime in your pocket and you can get your education.”

“You don’t have to have a dime in your pocket and you can get your education.”

Seven years ago, Eva Zhang was a waitress at a suburban Seattle sushi restaurant. Today, thanks to the training fund, she’s being paid to become a nurse.

Raised in Hubei, China, Zhang moved to the United States with her eldest son and then-husband when she was 24. She spent her first decade working in restaurants before deciding she wanted more growth and better benefits, especially for retirement. She enrolled at a small technical school just outside Seattle to become a medical assistant. The program was overwhelming — she was working full time and raising a family — but she graduated in 2015, at a cost of $10,000.

Her starting wage — $16 an hour — hardly justified that investment. She was making less than she had at the sushi restaurant, where she continued to work on weekends. But the job qualified her for a no-cost education program run jointly by her employer and her union.

Modeled on programs in New York State and elsewhere, the Washington initiative guides workers to courses of study at the University of Washington and other area institutions that suit their needs. Zhang, who reenrolled in college in the fall of 2019, plans to become a certified nursing assistant or licensed practical nurse, in-demand occupations that would increase her earnings and enable her to take on more complex, interesting work.

“The more I know, the more I can contribute to the patients and coworkers at my job,” Zhang said. “It’s really a lot for people who have a family and have work to go back to school. It’s not easy, but for me, I’m really grateful.”

Worker shortages are particularly acute in tech, where companies compete for workers who can take their skills anywhere. But technological proficiency isn’t a priority only in Silicon Valley, said CompTIA’s Kardel, whose employer is working with the U.S. Department of Labor to promote on-the-job learning. Employers who rely on technology — a group that includes most manufacturers, many retailers and the government — are chasing the same workers.

“Tech is not only a vertical, it’s horizontal,” Kardel said. “These jobs are part of companies we all rely on every day.”

Ticking through the positions IBM looks to fill with trainees, Kelli Jordan, IBM’s director of career and skills, borrowed a phrase coined five years ago by a former IBM CEO: “new-collar jobs.” The company is looking for employees who can take on white-collar work that doesn’t, or shouldn’t, require a four-year degree. The necessary learning happens on the job. 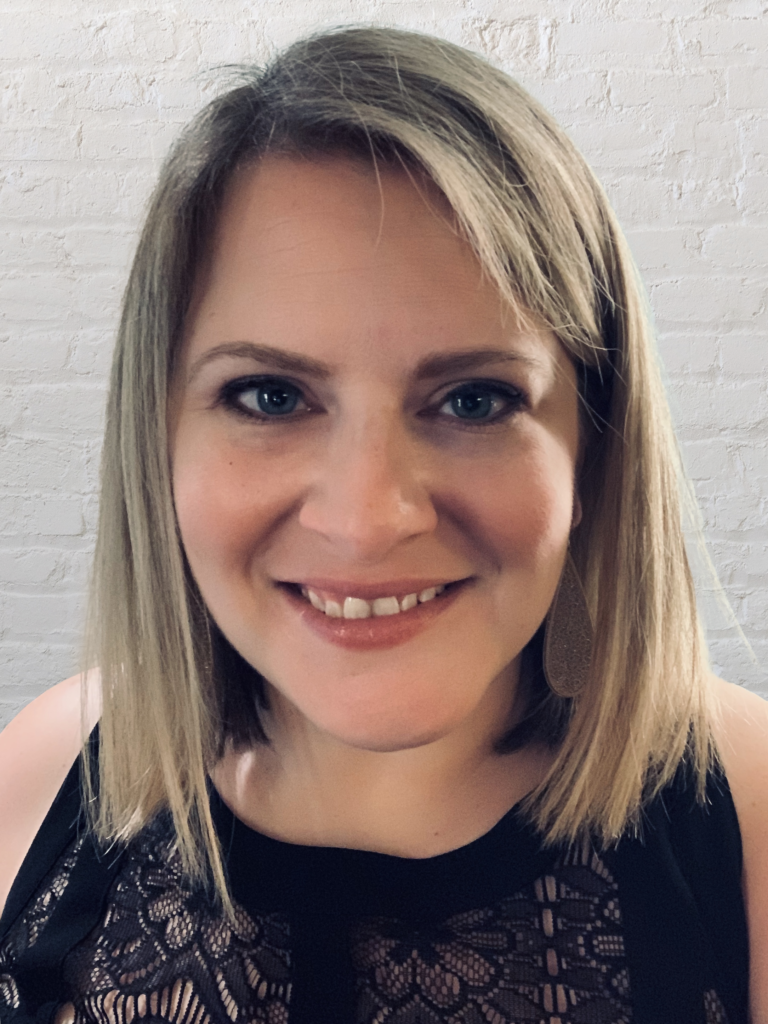 Kelli Jordan, IBM’s director of career and skills, described the company’s new training program meant to move recruits without tech experience into a variety of roles at the company as an effective way to fill “new-collar” jobs. IBM

IBM aims to hire more than 400 trainees each year, putting them on 25 different training tracks, from software development to data science to human resources, Jordan said. IBM retains about 90 percent of participants in the program, which has cost the company $65 million since 2018.

Like many in its industry, IBM is advocating for the National Apprenticeship Act, which would inject $3.5 billion in federal support for Department of Labor-registered programs like these. The legislation passed the House of Representatives with broad support but has not come up for a vote in the Senate.

As IBM measures it, the federal government puts forward $130 billion annually in grants, loans, and other benefits to undergraduate students pursuing bachelor’s and other higher education degrees — spending that, in the company’s view, no longer meets the needs of the digital economy.

Programs that pay trainees to learn “are so critically important when we think about making good, well-paying jobs accessible to everybody,” Jordan said. “And for companies, it’s not something that is insurmountable.”

Haruza, the IBM trainee, is learning database management during the days. He’s still chipping away at his bachelor’s degree in the evenings — mostly to put off having to pay back his student loans. Haruza doesn’t think the college degree will be particularly useful, and doesn’t see why anyone would need one in a field that requires regular retraining anyway.

“I hope education changes to something that’s actually beneficial to people,” Haruza said, “and can actually get them jobs.”

This story about paid training programs was produced by The Hechinger Report, a nonprofit, independent news organization focused on inequality and innovation in education. Sign up for the Hechinger newsletter.